Added 3 months ago by
25 Views
Serangoon Singapore Walking Tour (2019) is a video recording of my walk with no talking. I highly recommend using headphones to experience 3D environment sounds as I recorded with binaural microphones.

➥➥➥ SUBSCRIBE FOR MORE VIDEOS ➥➥➥
My channel regularly publishes walking tours (with no talking) of my walks in various countries and if you want to see all my walks, visit my channel page:
www.youtube.com/c/DiscoveryWalkingToursTV

Serangoon Info:
Serangoon is a planning area and residential town located in the North-East Region of Singapore.

Tamil Muslim traders from India pioneered the settlement of Serangoon in the early 19th century. Serangoon Road was first identified as a bridle path in 1821, and by 1822 it had reached the present Woodsville Corner. A road was proposed in 1822 and by 1827, the road reached Sungei Serangoon (Malay for Serangoon River).

It is difficult to say what the word Serangoon actually means. The etymology of the word is uncertain. The most plausible view holds that it was derived from a small marsh bird, the burong ranggong in Malay, which was common in the swamps of Sungei Serangoon (formerly the Rangon River). It had a black back, white breast, long, sharp bill, grey crest, long neck, and unwebbed feet.

On the early maps of Singapore, the name of the area is called Seranggong. Se is short for satu, or "one", in Malay. An alternative derivation is offered by Haji Sidek, an amateur etymologist interested in Malay place names, who speculates that the name Serangoon is derived from the Malay words diserang dengan gong, which means "to be attacked by gongs and drums". According to Haji Sidek, people used to go to Benut in Johore through the Serangoon area and had to use gongs to frighten off wild animals and snakes which used to roam the jungle covered area. Serang dengan gong gradually became Serangoon over the years.

Siddique and Puru Shotam, however, argue that such as derivation meant that the name developed after the road, which is inconsistent with the fact that the term ranggong predates the development of the road.

In the 1828 Franklin and Jackson's Plan of Singapore, there are three references to Rangung: Tanjong "Rangung", the River "Rangung" and the Island "Rangung". In Coleman's 1836 Map of Singapore, the names Tanjong Rangon and Rangon River can already be found. Rangong in Malay means "warped or shrunken", as of the plane of a wall, roof or decking. It is evident that the road cut from Selegi was named by the early references to "Rangung" in the north-east of the island – one road linking the swamp bird area of ranggong – hence "Serangoon".

The northern tip of Serangoon Road is known as nan sheng hua yuen pien (南生花園邊), or "fringe of garden in the south", which referred to the Chinese vegetable gardens in the Bendemeer area. This general area was also termed mang chai chiao (feet of the jackfruit) because of the many jackfruit trees which grew there. The Hokkien Chinese name for Serangoon Road was au kang in, meaning "back creek". The Chinese refer to Serangoon Garden as ang sali.

The main occupants of the area were, however, the Indian community. Indians congregated here from 1826 to work in the brick kilns செங்கல் சூளை and cattle industries situated here. The kilns were discontinued in 1860 and the cattle sheds were removed by the municipality in 1936. The area, however, remains predominantly Indian and today is known as "Little India", லிட்டில் இந்தியா the locus of Singapore Indian retailing, everyday culture and festivities.

Development of Serangoon New Town began in 1982, with the first few HDB flats being built as Neighbourhood 3 and as a portion of Neighbourhood 2. Subsequently, Serangoon Central started development in 1984 and was completed in 1989. 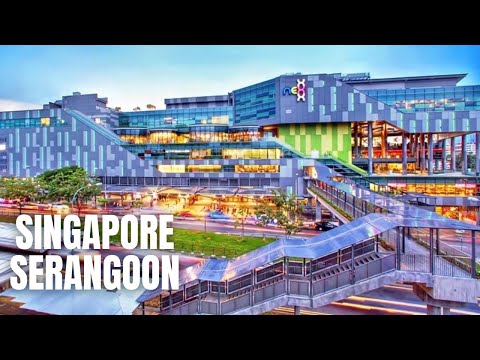 Serangoon Singapore Walking Tour (2019) is a video recording of my walk with no talking. I highly recommend using headphones to experience 3D environm...